“Markos and Jerome have it right in “Crashing the Gate.

“Progressives need to change the way we do business if we want to confront and destroy the daily right wing assault on our values. And that’s exactly what we’re doing: empowering local activists, unabashedly articulating our values and recognizing that our movement is bigger than any one person or group. The future of people-powered politics looks bright.”

The research backs this up…

Los Angeles Times: Power to the people with a political takeover plan. To release a work like this is a gamble. The authors are betting on its success in a similar manner to that with which my colleague is more familiar with his mobile apps. But some gambles pay off, and Crashing the Gate is one of those.

Blue Oregon & PERRspectives:Markos and Jerome see a party beset by a three-headed beast that keeps the Democrats out of the majority.

The Stranger:What Crashing the Gate advocates is essentially a bloodless coup inside the Democratic party: a sidelining of the high-paid consultants who have advised Democrats straight into minority status; an eviction from the party’s inner circle of the shrill single-issue advocacy groups (like NARAL Pro-Choice America) that demand absolute fealty to their positions, even if it means losing an election; and an influx of new ideas (and cash) into the party via the

Charlie Cook, NationalJournal.com: It is one of the two best books I’ve read in years about the Democratic Party, its myriad problems and challenges…

Daou Report: Kos (Markos Moulitsas Zuniga) and co-author Jerome Armstrong are receiving much-deserved accolades for their new book, Crashing the Gate: Netroots, Grassroots, and the Rise of People-Powered Politics. True to form, the pair takes direct aim at the structural flaws, strategic failings, and ideological timidity of the Democratic establishment. It isn’t a blanket condemnation – several courageous Dems are praised – but it is an unflinching look at the Party through the eyes of two netroots visionaries. While Republicans are by no means spared, it’s the brutally honest look at the Democratic establishment and progressive infrastructure (if such a thing exists) that makes Crashing the Gate an essential read.

AlterNet: It’s hard for Democratic candidates to sound like real people when Washington’s consultant class holds the purse strings and the power (excerpt).

SF Bay Guardian: Crashing the Gate: Netroots, Grassroots, and the Rise of People-Powered Politics isn’t primarily a book about blogs, and it doesn’t fall into the self-indulgent trap of arguing that the

The Oregonian: It’s an indictment of how the Democratic Party does business, and a vision of a new politics rising out of keyboards all across the country.

Beyond Chron: Crashing the Gate could have degenerated into a rambling, insular, self-congratulatory testimonial about how liberal blogs have changed politics. Instead, Moulitsas and Armstrong have written a lucid, concise, and deeply insightful book that exposes the Democratic Party as a moribund Beltway-centered apparatus stuck in neutral with greedy consultants, old campaigning tactics that no longer work, and party elites who grasp their ever-shrinking fiefdom and resist anyone who dares to challenge their authority.

In These Times: In fact, there’s something remarkably bracing about the authors’ approach. The Unified Theory of Progressive Revival may remain the Holy Grail, but while pursuing it, why not start attacking the small systemic dysfunctions that cripple the movement’s effectiveness?

NYTimes Book Review: Armstrong and Moulitsas may well be right that the next great partisan transformation will be theirs.

MediaChannel.org: Many will disagree with one or another of the prescriptions in this book.

MyDD’s Matt Stoller: How the Democratic Party Can Change Its Pronouns

The Nation: Bloggers at the GateMSNBC: Blog pioneer maps political strategy for 2008

Buzzflash: If you are high on the possibilities for the Internet transforming progressive politics, then this is the book of the moment to read.

NW Progressive Institute: Review: Crashing the Gate is a breath of fresh air for the progressive movement

New York Times: Bloggers at the Gates: What Was Good for EBay Should Be Good for Politics

Crashing the Gate is a shot across the bow at the political establishment in Washington, DC and a call to re-democratize politics in America.

Written by two of the most popular political bloggers in America, the book hails the new movement that is changing the way political campaigns are waged. 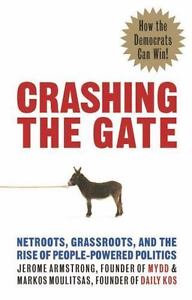